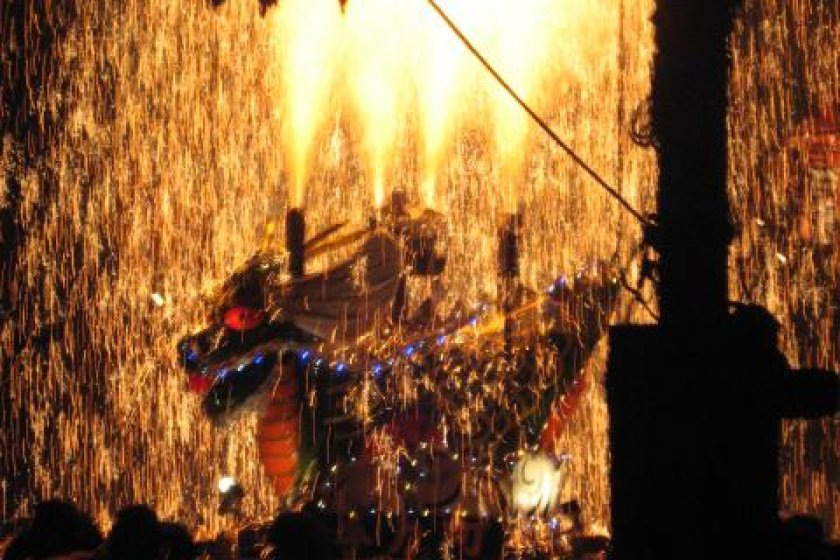 I couldn’t wait for April to roll around this year so I could go to the Tejikara Fire Festival. It’s been going on for almost 300 years! When I first heard about it in Aug. 2010, it was another, “I’m there.” moment. Fire, the element of danger, and proximity made it an easy decision. But I had to wait over a year for the event as last year’s was cancelled due to the tsunami and earthquake disaster in the Tohoku region. So when the forecast predicted rain for the weekend of the festival, I thought, “No, way. Am I going to be denied two years in a row? What are the odds?” I am an ame-onna though. (A woman who has bad luck attracting rain at inconvenient times.)

The night before the festival, even though it was drizzling, the floats which represent the surrounding neighborhoods were being paraded around for a pre-festival tour in their respective ‘hoods. I asked one of the local volunteers what he thought about the next day’s weather. He said very confidentially the festival would happen. He was right.

Held annually on the second Saturday in April, festivities start late in the morning. Food stands and game booths line the street in front of the shrine and go on for several blocks. Go with an empty stomach so you can sample a bit of everything. Yakisoba, little sponge cakes in the shape of cute cartoon characters , chocolate covered bananas on a stick, squid on a stick, sweet potato fries, etc. There’s something for everyone. (Even vegans.)

Around noon at San Torii near the post office, the parade begins. One by one teams of men from each neighborhood make their way down the main thoroughfare to the shrine. First the bell ringers, then the float entourage. One thing you should bring to the festival is a pair of earplugs. The clanging bells and the exploding strands of firecrackers are deafening. You might have the urge to get up close to see the action but it’s best to stay back, out of the way of firecracker debris and noxious fumes. The participants seem to thrive off the excitement. I couldn’t get over the bell ringers squatting over the live fireworks. They seemed unphased.

While there are other events, the main attraction of the festival starts right before 7p.m. on the grounds of Tejikara Osu Shrine. (Be sure to check out the grounds of the shrine during the daytime to get a close-up of an elaborate diorama of Kabuki plays, and a hint of what awaits you later that night.) By the time I headed over all entrances except for the main one were closed off so I made my way in with the herd of people and managed to find a spot. I noticed a bleacher section at the north end. (Get there early if you want a seat.). The rest of us were kept along the western perimeter of the grassy area. Another way into the grounds, which was popular with many spectators, but not encouraged, is by climbing over a stonewall on the south side.

In the middle of the grassy area were several 21- meter tall poles, one representing each neighborhood, with a triangle shaped topper made of ten paper lanterns with candles inside. A rocket like flame was shot out aimed at the topper setting off an explosion of sparks, and the lighting of each candle one by one. I was practically underneath one of the poles so everyone around me ducked and covered their heads when the sparks came raining down. Luckily, no one’s hair caught on fire. I heard people squealing about bits of embers getting in their eyes. You want to keep looking up, but you also don’t want gunk in your eyes. Note to self for next time – bring a hat or wear a hoodie.

The best part of the night was watching the men parade around the floats on their shoulders through showers of sparks. Shirtless! The floats were packed with gun powder, and when set off sent massive amounts of sparks spewing out from the top. I wanted to get closer for better photos but that wasn’t going to happen for obvious reasons.

Just when you thought it was winding down, the excitement got revved up. From the diorama stand on the west side pinwheel fireworks and a wall like cascade of sparks lit up the night. The men had a final hoorah dancing around in the scorching waterfall. Barebacked! It went on for several minutes. By that point I was fully impressed and satisfied, but there was more. We were treated to a traditional fireworks show. The festival officially wrapped up with a much more sedated exit of the floats for a final tour of the area.

I asked a couple locals if there were a lot of serious injuries, and they both said, “Not really.” For such a small shrine in a quiet part of Gifu City, the scale of the festival is astonishing. I’m still curious how much gun powder it took to put on such a show. The Tejikara Fire Festival is easily in my Top 5 Japanese Festivals.

Mark it on your calendar for next year.

I came to Japan from the U.S. about six years ago to live, work and play. There's always something new to be discovered, and every day is still an adventure here. 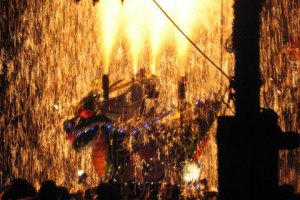 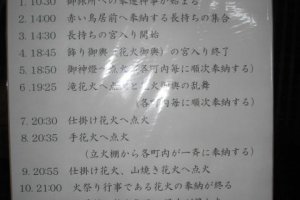 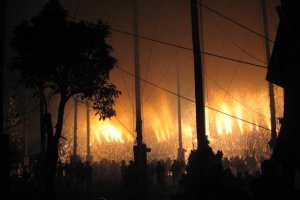 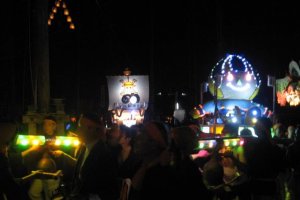 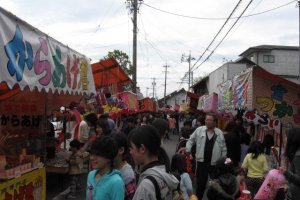 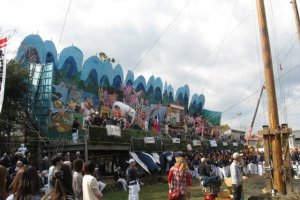 Elena Lisina 11 months ago
I wonder if such amount of fireworks is safe?
Reply Show all 0 replies

Elena Lisina a year ago
Such events in Japan are really amazing!
Reply Show all 0 replies

Kim B a year ago
This looks epic!
Reply Show all 0 replies
4 comments in total