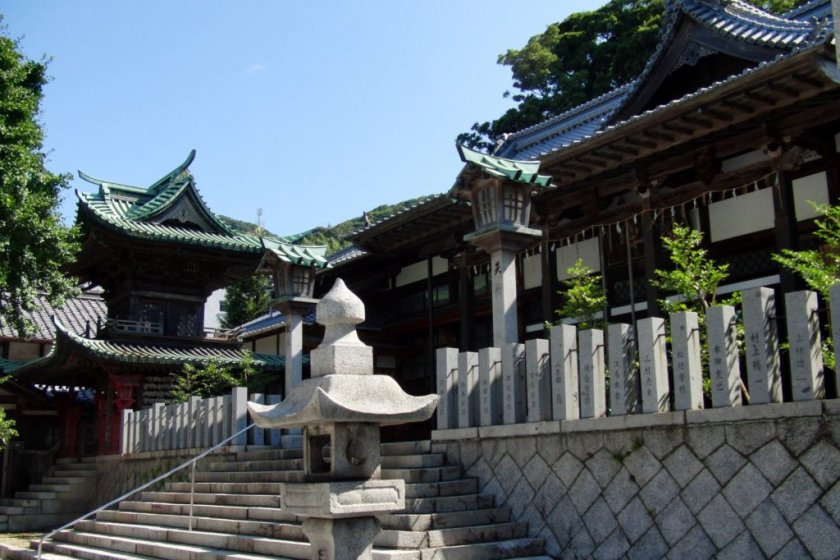 The Koso Hachiman Shrine in Mojiko stands on a pretty hillside overlooking the Kanmon Strait, a short distance from the Mojiko Retro area. I visited the shrine on a hot morning in July. As I sat resting on the steps enjoying the view, cool breezes blew off the sea. Two elderly shrine gentlemen brushed the grounds, while a succession of Shintoists arrived in their cars, made their morning obeisance, and drove off.

The shrine was founded in the year 860 to house the helmet of the Empress Jingu, shaman and warrior. This helmet was recognized as a shintai, a repository of a spirit. In Japanese mythology, Hachiman is the guardian deity of warriors, hence the connection with the helmet. It should be noted that no helmet of the Empress Jingu can actually be seen at the shrine, nor does the building itself date from the year 860. The shrine was registered as such in 1872. Despite the fact that Hachiman is the god of warriors, people who aren’t inclined to wave swords also worship at his shrines.

The Koso Hachiman Shrine is notable for its elaborate pagodas with fine copper roofs and various lanterns. It also features a number of beautiful trees, one of which obviously died a long time ago. If you’re in the area, it’s well worth climbing the steps up to the shrine.

On the hill behind Kosho Hachiman Shrine (and totally unrelated to it, except geographically), is the World Peace Pagoda. Hoping to get a view of the Kanmon Strait and the suspension bridge across it, I climbed the steep hill up to the pagoda only to find that trees completely obstructed the view. The pagoda itself a weird sort of place featuring painted panels of episodes from the Buddha’s life and photos of Burma circa 1970. Visitors are expected to put 100 yen in a tin for access to the pagoda. On the way back down, a group of old folk tending the allotments on the hillside seemed very keen to chat. Obviously they didn’t see many foreign visitors making their way up to the World Peace Pagoda.

I was born in Bristol, England, and I came to Japan in 1991 … which means I’ve lived half my life in this island nation on the other side of the world. The theme of my career in Japan has been communication. I started as an English teacher, and moved into translation as I learned Japanese. I worked at a well-known electronics manufacturer, facilitating their multinational communications before I became a freelance translator. As such, I translated a lot of tourism-related information. It was obvious to me that most of this isn’t sufficient to convey the excitement and wonder of Japan. In 2011, I established Knowledge Travel Partners, an inbound tourism consultancy. After living in several regions of Japan, I settled in Ehime where my wife is from. It’s on the southern island of Shikoku facing the beautiful Seto Inland Sea, Japan’s Mediterranean. The pace of life here is slow and peaceful, but we do like to throw a raucous festival now and again. 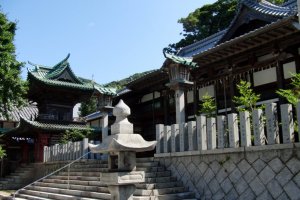 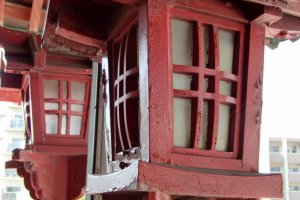 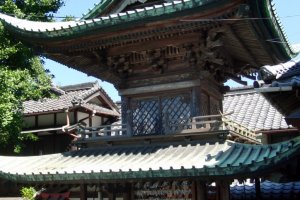